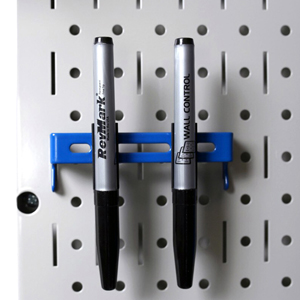 - Patented Holster Cap - Always have your marker by your side

- Made in the USA

About RevMark's superior Made in USA brand and products:

In 1927 John Shea started Radiant Pen in New York City, making fountain pen tips in a factory on the corner of Prince and Lafayette Street.  Twenty-seven years later, after serving in the Army Air Corps, John's son Warren would open a plastic pen company, Rotary Pen.  Over the next 50 years Warren and his son, Hap, would produce over 1 billion pens for the U.S. government, the surgical field and the promotional industry.  The company, now Pen Company of America, still manufactures our entire line of pens and markers in Garwood, New Jersey.  And Hap is still here, joined by his daughter, Colleen, and his sons Matt and Greg.  Everyday we mold, assemble, print and package thousands of writing instruments, committed to keeping our products Made in the USA.

The reverse clip concept of RevMark was developed by a contractor who was tired of losing his marker, taking the cap off with his teeth and having to put down his project to take out his marker. Having an ingenious cap was not enough, so we built the new marker around our existing surgical marker that already passed the highest quality standards. RevMark uses a USA made industrial tip, top of the line ink and goes through rigorous inspection, making it your go-to marker on the job site, at your office, or in you home.

Don't settle for the old standard, Upgrade Your Marker to a RevMark.